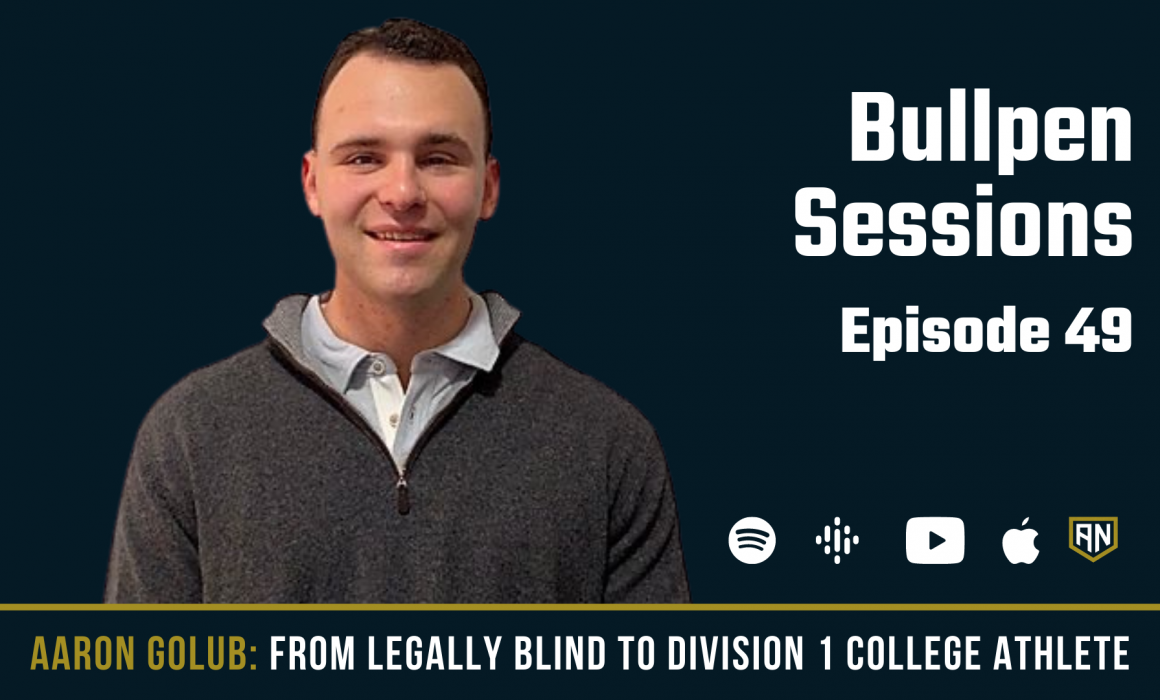 Hey hey! Welcome back to The Bullpen Sessions! Today, I’ve got an exceptional guest on my show that embodies the fact that you are fully capable of achieving your dreams! You can accomplish what may seem impossible if you’re willing to work hard enough for it.

I’m honored to have Aaron Golub on today’s episode. Aaron has achieved immense success both with college football and business, but here’s what makes his journey even more remarkable: He’s legally blind. You read that right. Despite the fact that Aaron has minimal vision, he was able to accomplish his dream of playing college football, and he did it through tireless hard work and never giving up.

In this interview, we’re going to get deep into Aaron’s journey and discuss what he’s learned along the way. Whether or not you’re an athlete, you’re going to be inspired by Aaron’s journey, and you’ll also learn many practical tips for pursuing your goals. Let’s get into it!

Who Is Aaron Golub?

Aaron Golub is the first legally blind person to play Division 1 college football. He was born with no vision in his right eye and incredibly limited eyesight in his left eye. Despite his handicap, Aaron became passionate about football when he was in seventh grade. He played as an offensive and defensive lineman, but he rarely played during games.

This all changed once he decided that he wanted to play Division 1 college football. Even though everyone else thought it was impossible, Aaron pushed himself and refused to give up. He ultimately became a long snapper for Tulane University, where he became a team captain his senior year.

Aaron is now an immensely successful financial advisor at Morgan Stanley. He is also a motivational speaker and hosts the inspiring podcast Blind Ambition With Aaron Golub. On the show, he interviews a variety of immensely successful people about how to overcome obstacles to achieve success.

Aaron’s story is inspiring, and it’s also a great reminder that you have no excuse when it comes to pursuing your goals. Despite his blindness, Aaron worked incredibly hard to achieve his goals and become a successful college football player. If you’re willing to work hard enough, you can overcome the obstacles in your life and accomplish your aspirations! Grab a pen and pencil because you’re going to want to learn all you can from Aaron!

In our interview, Aaron detailed his arduous journey from being an underweight backup lineman to becoming a team captain at Tulane University. When Aaron was young, he couldn’t play most sports without his parents’ assistance because of his handicap.

When he was in seventh grade, Aaron began playing football, but his limited sight forced him to play as a lineman. In his first four years of playing the sport, he rarely played in games:

“Being undersized [and] being legally blind, there were a lot of challenges there. And I was just trying to be a part of the team and get better. And I never really played a ton. So the first, let’s call it four years … I played during garbage times at the end of games when we were up or down big, but that’s not playing football; that’s playing because the coach feels sympathetic and throws in the guys who don’t play it much.” – Aaron Golub

In 10th grade, Aaron decided that he had enough of being on the sidelines. He became determined to become a starter and eventually play college ball:

“I said, ‘I want to be a starter. I want to play in college. I want to play Division 1 football.’ … And I just created a plan instead of thinking about it. I [followed] through. I just took action. And I said, maybe if I become a good enough long snapper, I can play Division 1 football. I just … started trying to learn and just put in the work and the effort that no one else would.” – Aaron Golub

Aaron trained diligently during his sophomore year to become a long snapper. After his sophomore year, he attended the Rubio Long Snapping summer camp, where players receive long snapping training and are nationally ranked based on their skill. Though he entered with high expectations for himself, Aaron found that he still had a long way to go before playing college ball:

“And I get in and … I snapped the ball [and] just sail it over [my] partner’s head, and I was horrible. And at that moment, I realized, ‘Okay, all this work I’ve been putting in, I need to work ten times harder to be as good as everyone else and 20 times harder than I’m working right now to be better than everyone else.’” – Aaron Golub

Aaron worked significantly harder than his peers to become an extraordinary long snapper. He then reached out to every college football team in the country to find a place to play. He even contacted some schools five different times if he didn’t receive a response. This is such a great lesson that everybody can learn from — you have to stay persistent when it comes to pursuing what you want. Aaron didn’t let rejection stop him from achieving his goal. Despite all the adversity he faced, Aaron was eventually recruited by Tulane University.

You can achieve anything you want through hard work, even if it seems impossible at first. Most people would have thought it impossible for a legally blind person to play in Division 1 college football, but Aaron was able to do it through his tireless efforts and intense tenacity. What dreams do you have that may seem impossible right now? What actions do you need to take to make those dreams happen?

Work Harder Than Everyone Else

Aaron was able to play college football despite others thinking that he didn’t stand a chance because of his disability. He had excellent advice for overcoming adversity and proving others wrong:

“First off, outwork everyone else. Don’t let anyone else even compare to the amount of hard work that you’re putting in everything you do.” – Aaron Golub

This is such great advice regardless of whether you’re an athlete or a business person or any other profession. You have the ability to outwork those around you regardless of your skill or challenges that you may be facing. Commit to your goals and don’t back down.

When you’re working towards your dream, you may get some negative feedback from those around you. Some people might not believe in you, and try to tear you down instead of build you up. This is why it’s also essential that you overcome the opinions of others:

I hope you write that down because it is so crucial for you to remember. There will always be naysayers trying to convince you that you can’t do something. Their opinions DO NOT control you. The only opinion of you that matters is your own. You can accomplish what you want, even if everyone else thinks it impossible.

I asked Aaron what advice he’d give to young athletes wanting to play college sports, and his advice is something that everyone can apply to their lives:

“Anything that you do is hard work. … In business I’ve been able to achieve success because I wake up at 5:00 AM every day and I go to bed at 11:00 PM every day. And for those 18 hours, I’m doing work. I’m getting my stuff done. I’m building new contacts, new relationships, [and] expanding everything I’m doing.” – Aaron Golub

Aaron succeeded in football and is now thriving in business because of the hard work that he puts into it. He’s had to work much harder than the average person because of his limited eyesight, but that didn’t stop him from accomplishing his dreams. If Aaron can play professional football and succeed in business despite being legally blind, you can achieve anything if you’re willing to work harder than everyone else!

Using Adversity and Failure to Grow

An essential lesson that Aaron has learned is understanding how to view life’s challenges. He encourages people to view life’s adversities as things happening for you rather than to you:

“The biggest lesson that I’ve learned just throughout my life is understanding that things in life happened for you and not to you. … And so if you think of things happening to you, you take the stance of a victim, and you think, ‘Oh, woe is me.’ Whatever. When you think of things happening for you, you can understand that life happens for you for a reason, and it’s challenges are to make you better.” – Aaron Golub

When you view life as happening for you, you can use adversity to grow and become a better person. Don’t feel sorry for yourself when you face challenges — use them to grow.

“It is a gift because it allows me to pave the way for others in sports, in business, in life, and in everything I’m doing and create an impact and inspire tons of people on a daily basis. And if I wasn’t legally blind, I wouldn’t have that opportunity. And realizing that that happened for me because it shaped who I am, and it allows me to impact the lives of others on a daily basis, [which] is really incredible when you think of it that way.” – Aaron Golub

Aaron uses his blindness to inspire others. His mindset enables him to grow from adversity rather than be a victim of it. What hurdles in your life can you use to grow? Shift your mindset so that you’re thankful for the challenges that life presents to you. Use life’s challenges to become better and help others.

Another crucial lesson that Aarron learned over the years is that failure is NOT a bad thing:

“Failing is success to me as long as I’ve learned from it. And if you learn from your failure and improve upon it, that’s not failing — that’s succeeding. The only time failing is an issue is if you fail, and then you don’t make adjustments. And then tomorrow and the next day, you fail again in the same exact way.” – Aaron Golub

Even though Aaron experienced failure before becoming a successful long snapper, he used his failures to learn and become better. He stressed that people shouldn’t worry about failing because you can use it as an opportunity to learn from your mistakes and get better at whatever you’re striving to accomplish.

I was so blessed to have Aaron Golub on my show. His story is absolutely inspiring, and it’s a great reminder that you really can accomplish anything if we’re willing to put in the work and never give up!

Keep up with Aaron on Instagram @aaronjgolub, and definitely check out his podcast Blind Ambition With Aaron Golub, where he interviews other successful people who have overcome their own hurdles.

If you felt inspired by this article, make sure to check out the full podcast episode! Also, if you would subscribe to the show on Apple Podcasts and leave me a 5-star rating, I would be incredibly grateful! And don’t forget to share this episode with someone who needs to hear it! Tag me @andy_neary and Aaron Golub @aaronjgolub with a screenshot of your biggest takeaways on Instagram!

Guys, you have the ability to accomplish what you want to achieve. The secret is NEVER giving up in the face of failure and adversity. If you work harder than everyone else, you will achieve success!

See you next time!