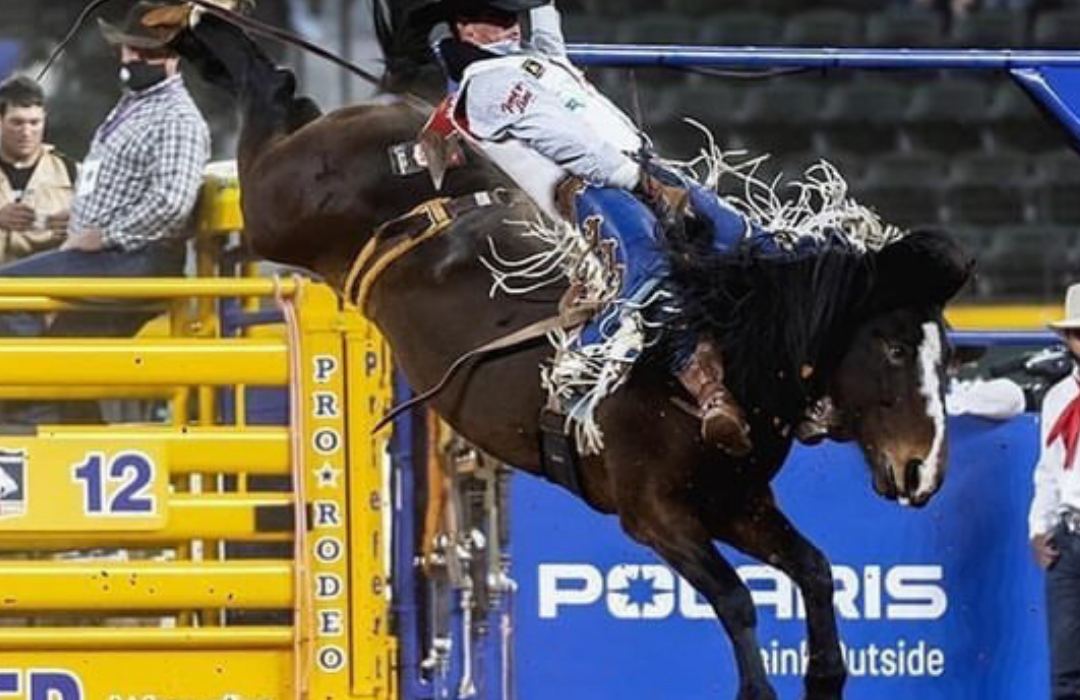 Hey, hey! Welcome back to Friday Bullpen Sessions! Today, we have an extraordinary guest who’ll share some practical insights that will help you achieve success in business and life. So grab a pen and a paper and sit up, shoulders back because this is going to be one wild ride.

I feel honored to have Richmond Champion, who took some time off in the middle of his participation in the National Finals Rodeo, with us today. I was lucky to have his wife, Paige Lawrence, a Canadian figure skater in the 2014 Olympics, as our guest a month ago. This week, I got luckier as I got to talk to him about how he, as a rodeo athlete, prepares mentally and physically to play and ride to his peak performance.

Who Is Richmond Champion?

“I had great mentors who pushed me to not be afraid of falling off or riding the scariest horse in the world. They would tell me to just go and do it because I’ll thank myself later.” – Richmond Champion

Before graduating from high school, something happened that would change Richmond’s life. He went to a couple of rodeos and won around $4,000. With money in his pocket, he realized that he could make a living by riding these animals. A breakthrough finally hit him when he won another big tour in 2013.

“Winning that big rodeo tour, I realized that if I do it here, I can do it anywhere. I just got to find a way to duplicate what is working.” – Richmond Champion

The NFR is the World Series of Rodeo. It consists of ten rounds on ten consecutive days. Each rodeo athlete gets to ride one of the several but similar horses for the first two rounds. The third round, however, is an elimination.  This year, Richmond got assigned to the Eliminator Bull called Killer Bee.

The Bull That No Man Can Ride

The phrase “bull that no man can ride” was coined from country singer Garth Brooks’s song of the same title. The song is believed to be a tribute to the American professional rodeo cowboy, Lane Frost. Frost died due to injuries sustained after a show when the bull’s horn struck him in the back, breaking several ribs and severing an artery.

“What most people do not know is we do not show up with a horse that we get to ride every single event. There are several horses that we draw from. They are all the same in the first and second rounds. But what comes next is the eliminator, and this year’s just terrifying. They call her Killer Bee, and she is known to be one of the harder, tougher horses to ride in the circuit. I’ve seen her take down four-time world champs and sports legends. When you see that even the best rodeo athletes buck off from Killer Bee, everything becomes a whole different ball game.” – Richmond Champion

To say that Richmond was afraid is an understatement. He knew how difficult it could be to ride a scary animal, but he is more worried of the mental war from learning about it the night before the show.

“The mental game can be nerve-wracking. It can make or break any rodeo athlete. You’re terrified and worried, but you got to figure out how you’re going to get some sleep so you can be ready for the long day ahead.” – Richmond Champion

Rodeo’s thrill thrives on the dangerous circumstances surrounding it. In a sport where one wrong move can be the difference between life and death, even a veteran athlete can buckle on his knees while looking at those scary horses. But this fear is just one of many.

“So you want that rank horse because riding it well will get you a lot of points. They’re entertaining to ride, which is a big flash factor that will help you get more points for the animal. Every guy has his own style, and even when you emulate the best, your scores are really up to the judge that day. There’s going to be days where you make a great ride, and they didn’t like it, and that’s just part of it. It’s a judged sport. You just got to get by them.” – Richmond Champion

Knowing that you are up against 14 of the toughest and the best athletes in the field is another Killer Bee. This can put someone with a weak mental state on edge. Though the kind of camaraderie among the men can be questioned by others, Richmond believes that the sports’ inherent danger keeps them together.

“Well, obviously, we want to beat each other every day. But knowing that every one of us shares the inherent risks makes us a family. We can ask each other for help. We get to dine together and have fun.” – Richmond Champion

Rodeo is one of the most dangerous sports, and many wonder what kind of courage or amount of preparation is needed to make it in a show. So imagine competing in the national finals, where athletes have to show up every single time for ten terrifying days in a row.

“When I’m faced with an internal struggle of whether I should show up or not, I always tell myself every time I come that it’s just another rodeo. It’s just like riding ten times in a row. There’s really no difference since I do it all summer long and over the country. … It’s a mind game. You need to overcome your self-doubt as tough as it may be. You need to trust what got you here, that it is the best you have done and can do. And that’s really difficult — finding that place of peace and satisfaction because there is always that little voice telling you that you could have done better.” – Richmond Champion

How to Be Mentally Prepared for Life’s One Big Ride

“Paige would always advise me to avoid overthinking it. She reminds me to keep my eyes on the outcomes that I want and just forget about everything else. Hearing those would immediately make me feel better. Having her on my team is a success in itself. Since she’s been a part of my career in the last few years, I don’t get to make excuses. That is definitely a big part of my success.” – Richmond Champion

“There are individual horses you have to get in a fight with by going with the flow and, and resisting it at the same time. The best rides are when you’re using the horse and fighting them, but you’re using their moment to help you. You’re just flowing with everything and loving it. But to do this, you have to get your brain out of the way. You need to stop thinking about anything else. Tell yourself to go rock and roll with it — no overdoing. Live in the present and enjoy the moment.” – Richmond Champion

Guys, you need to start following this champ if you haven’t already. The simplicity and practicality of his insights were empowering, and I’m confident that if he could change his mindset and win over his mental wars, you can topple yours too.

If you’re finding value in Friday Bullpen Sessions in your business and life, please go to Apple Podcast and subscribe. Give it a five-star rating. Also, don’t forget to share this post with someone who needs to read it. Tag me, @andy_neary, and Richmond Champion, @richmondchampion, with a screenshot of your biggest takeaways on Instagram — I’d be extremely grateful! Old and new fans can also get daily updates and inspiration by following Richmond on Facebook.

Before I go, I want to tell you a little bit about my new coaching program: The Broker Branding Academy! This Academy is for insurance professionals who are focused on HYPER GROWTH! If you want to blow your 2021 sales out of the water, you MUST have a personal brand. Your prospects are buying you — not the logon on your business card. I’ve designed the Broker Branding Academy to teach you, step-by-step, EXACTLY what I’ve done to build a personal brand my prospects and clients KNOW, LIKE, and TRUST. It took me six years … but we’ll get you there in four months! Ready to enroll? Click here!

Thanks for reading. Until next time, folks!